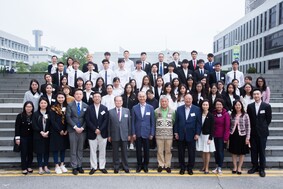 In his welcoming address, Professor Fok Tai-fai expressed his heartfelt gratitude to SFA for the establishment of the Bursaries to support students with financial needs.  On behalf of SFA, Mr Jimmy Jim delivered an address at the tea gathering.  “We hope the Bursaries can help relieve the financial burden of the students and motivate them to strive for their academic excellence,” said Mr Jim.  Lau Yan-yi represented all bursaries recipients to give a vote of thanks.  “We would like to thank SFA wholeheartedly for establishing the Bursaries which encourage us to achieve our goals.  We promise to give back to the society after graduation,” said Lau.

Aiming to support students with financial difficulties, the Shanghai Fraternity Association Diligence Bursaries was established in 2017 with a generous donation from SFA to award 65 full-time undergraduate students in CUHK including 15 students from Lee Woo Sing College. 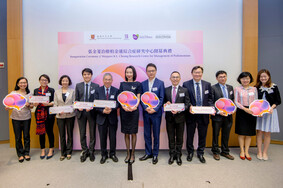 The Faculty of Medicine at The Chinese University of Hong Kong (CUHK) inaugurated the Margaret K.L. Cheung Research Centre for Management of Parkinsonism (the Centre) today (11 April), World Parkinson’s Day. With a generous donation from Ms. Margaret Kam Ling CHEUNG, the Centre is set up to conduct transdisciplinary research that enables the discovery of therapeutics for preventing or slowing the progression of parkinsonism.

The Centre will establish registries for early stage Parkinson’s disease (PD) and cerebral small vessel disease (SVD), both the most common diseases causing parkinsonism, in Chinese subjects to develop precise biomarkers and diagnostics as well as to predict and monitor disease progression. The team has also built Hong Kong’s first custom-built in vivo multiphoton microscope which will greatly enhance the future development of novel therapeutics that can delay the progression of SVD.

Over 6 million individuals suffer from PD globally, while one third of HK elderly are harbouring SVD

Parkinsonism was first identified more than 200 years ago (1817) by Dr James Parkinson. It refers to a cluster of symptoms that primarily includes slow movement, together with other conditions such as stiffness, tremor and/or instability. The most common diseases causing parkinsonism include idiopathic PD, which is the second most common neurodegenerative disease, and sporadic cerebral SVD. Currently, it is estimated that 6.1 million individuals suffer from PD globally. In China there are 1.7 million and in Hong Kong 12,000 people with PD. It is projected that the number suffering from PD will at least double in the coming two decades because of an ageing society. As for SVD, the prevalence is even higher. About one third of the elderly in Hong Kong are incubating this disease, contributing to a slow and unsteady gait that is commonly seen in many older people. Stroke and dementia are other common manifestations of SVD.

Donor Ms. Margaret Kam Ling CHEUNG, said at the inauguration ceremony of the Centre, “Thousands of individuals and their families are being affected by parkinsonism in Hong Kong and around the world. I hope the Centre can advance research breakthroughs in the management of parkinsonism to benefit the well-being of patients and families suffering from parkinsonism.”

Professor CHAN Wai Yee, Pro-Vice-Chancellor/Vice-President of CUHK, remarked, “The establishment of this Centre is very timely given the expected increasing burden of parkinsonism coming with the ageing society. We believe this donation will realise the visionary steps taken by CUHK to generate a profound understanding of advancing parkinsonism management, alleviate the suffering of patients and their families and raise up future high quality researchers in this field.”

Experts from different disciplines unite in the fight against parkinsonism

Despite certain breakthroughs made over the centuries in the management of parkinsonism, there is still no effective treatment that can slow progression of PD and SVD. Professor Vincent Chung Tong MOK, Director of the Centre, Mok Hing Yiu Professor of Medicine and Head of the Division of Neurology, Department of Medicine and Therapeutics, Faculty of Medicine at CUHK, stated, “Developing novel disease-modifying therapeutics that can be applied at the earliest stage of the disease is the grand challenge in the fight against parkinsonism.”

To tackle this challenge, the Centre will unite researchers from different disciplines (including clinician scientists, neurologists, psychiatrists, neuroscientists, radiologists and engineers). The team will focus on unravelling disease mechanisms and developing early detection methods and therapeutics that can slow the progression of the diseases.

Basic research focusing on SVD is severely lacking in Hong Kong and Asia. The Centre has built a state-of-the-art in vivo multiphoton microscope dedicated to the study of SVD. Dr. Owen Ho KO, Associate Director of the Centre, Assistant Professor and Head of Translational Neuroscience Unit at the Division of Neurology, Department of Medicine and Therapeutics and Assistant Professor of the School of Biomedical Sciences, Faculty of Medicine at CUHK, explained, “Our system allows simultaneous measurements of neuronal and neurovascular changes in awake behaving animals, for studying pathogenic changes in the structure and functions of brain vasculature in animal models of SVD. Combined with single-cell genomic techniques, our work will enhance the fundamental understanding of the pathogenesis underlying SVD, the knowledge of which is crucial for the future development of novel therapeutics that can delay disease progression.” The Centre has also built cellular and animal laboratories for conducting other basic research for PD and SVD.

Setting up an Early PD and SVD registries in Chinese population

Dr. Anne Yin Yan CHAN, Executive Committee Member of the Centre and Clinical Associate Professor (Honorary), Head of Parkinson’s Disease and Movement Disorder Unit, Division of Neurology, Department of Medicine and Therapeutics at CUHK, added, “As well as motor problems, PD is commonly associated with non-motor features such as cognitive and behavioural problems as the disease continues to progress, which further aggravate the disability. Current treatments (including dopaminergic drugs and deep brain stimulation) mainly help improve motor symptoms. Moreover, around 50% to 80% of the dopaminergic nerve cells are lost when the motor symptoms appear. Identifying subjects at an earlier stage and intervening early when degeneration is less severe will offer a higher chance of slowing disease progression as well as preventing the development of disabling symptoms.”

To this end, the Centre will establish registries for early stage PD and SVD in Chinese subjects. These registries will collect data among subjects who are at the early stage, e.g. subjects with REM Sleep Behavioural Disorder (RBD) which is considered as one of the earliest symptoms of PD. Dr. ZHANG Jihui, Executive Committee Member of the Centre and Assistant Professor, Department of Psychiatry, Faculty of Medicine at CUHK, said, “In this collaboration, we aim to develop precise biomarkers and diagnostics, e.g. clinical, whole genome sequencing, microbiota, and neuroimaging, to understand genetic and other putative causative factors, as well as to predict and monitor disease progression at the early stage of PD in the Chinese.” The Centre will also utilise the state-of-art MRI postprocessing technology (AccubrainTM) developed by Dr. SHI Lin, Principal Investigator of the Centre and Assistant Professor, Department of Imaging and Interventional Radiology, Faculty of Medicine at CUHK, to quantify automatically volumetric changes of multiple brain volumes at the early stage of the disease. 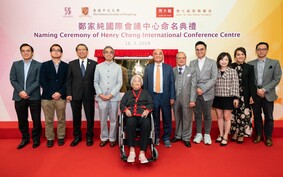 Dr Henry Cheng said, “I am honoured to support the establishment of the Henry Cheng International Conference Centre of CUHK. Through the convening of international academic conferences and forums, the Centre is well poised to be a hub for exchange of knowledge and ideas between China and foreign countries. Over the past few decades, my father had built a philanthropic legacy and inspired us to care for the people in need through education, health care and sustainable development projects. From generation to generation, we will continue his charitable endeavours with the same caring spirit. We are committed to making good use of our resources to promote self-reliance among the needy.”

Professor Rocky Tuan expressed his sincere gratitude to the Cheng Family and CTFCF for their staunch support over the years. He said, “Dr Cheng Yu-tung was a philanthropist who was enthusiastic about public welfare and education. His family members have inherited his virtues of doing good deeds and founded Chow Tai Fook Charity Foundation, with the objective of working with various non-profit organisations to promote sustainable community development. CUHK is very pleased to share the same philosophy with the Cheng family and to receive a generous donation from the Foundation to support the renovation of the Cheng Yu Tung Building. The first and second levels of the building have been converted into a comprehensive conference venue equipped with advanced facilities for the University to host more international academic conferences and events, so as to promote knowledge dissemination and exchange.”

As a forward-looking comprehensive research university with a global vision, a mission to combine tradition with modernity, and to bring together China and the West, CUHK is keen to establish a university conference centre to enable Faculties, Departments and research units to organise international academic conferences on campus, thereby attracting overseas academics and scholars to visit CUHK and strengthen its global presence.

The venue provides a dignified setting and is equipped with broadband and wireless internet access, audio-visual systems, and conferencing and IT equipment to provide a seamless presentation and conferencing experience. The rooms and areas provide great flexibility for hosting conferences for up to 460 scholars, with venues ranging from a large theatre for keynote speeches to rooms of different sizes for parallel and breakout sessions. Areas for conference catering and academic poster exhibition, together with Secretariat Room and VIP room set-ups for supporting of events, are also available.

Chow Tai Fook Charity Foundation (“CTFCF”) is a private family foundation founded by Dr Cheng Yu-tung and his family members in 2012. CTFCF is committed to supporting charitable causes through partnering and grant-making to non-profit making organisations, to provide opportunities and resources to the underprivileged, to empower individuals and to promote sustainable community development.

About The Chinese University of Hong Kong

Founded in 1963, CUHK is a leading comprehensive research university with a global reputation. Located in the heart of Asia, CUHK has a vision and a mission to combine tradition with modernity, and to bring together China and the West. Under the University’s unique collegiate system, the programmes and activities offered by its nine colleges complement the formal curricula by delivering whole-person education and pastoral care. The University has eight faculties: Arts, Business Administration, Education, Engineering, Law, Medicine, Science, and Social Science. Together with the Graduate School, the University offers over 300 undergraduate and postgraduate programmes. All faculties are actively engaged in research in a wide range of disciplines, with an array of research institutes and research centres specialising in interdisciplinary research of the highest quality.